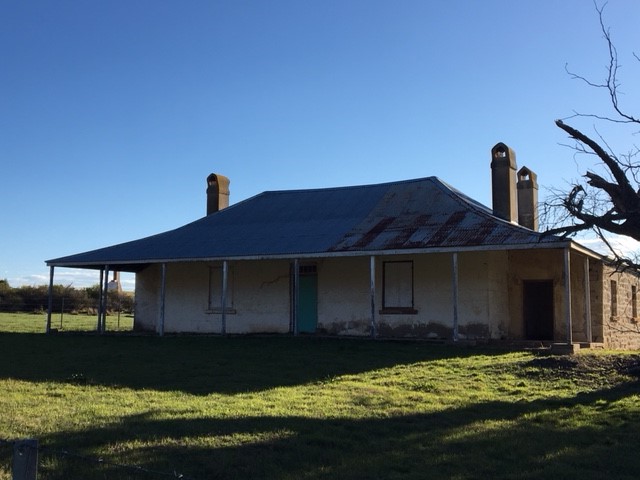 The image above is of Beulah homestead, near Appin in southwest Sydney. It is important as a rare example of 1830s colonial architecture that is still in – at least for the moment before it is surrounded by new housing developments – a rural setting. But there is something intriguing about it. In an attached stone room at the rear there is a narrow window. It is carefully crafted from sandstone with a well-cut groove for an external wooden shutter. The aperture flares out at angles to create a wider window on the inside. It follows the classic features and dimensions of rifle slits – often also called loopholes, gun loops or musket loops. In the 400 odd pages of the heritage report on this historic homestead there are two words about the window; ‘possibly defensive?’.

This image is of another stone outbuilding in the Appin area, at The Vines. It too has an embrasure, or opening in the style and dimensions of a rifle slit. In fact, I have now identified five similar features in buildings in just a few kilometres radius. It is possible, as several decades of Australian heritage studies of early colonial building have rather disinterestedly noted, that these loopholes were made for ventilation in granary structures, or were Georgian decorative features. But there is increasing circumstantial evidence at least that they may have been made for other reasons as well.

The first land grants of Dharawal land to settlers in the Appin area began in 1811. By 1816 there was a small settlement which grew throughout the 1820s. It is unclear exactly when these stone outbuildings were constructed – it seems to have been from the 1820s according to heritage studies – but it is known that outbuildings of stone were often the first structure of importance in frontier districts deep in Aboriginal land. So too, we know that in other colonies such as Jamaica, the British practice was to build domestic architecture with defensive elements. And we also know of hundreds of examples of rifle slits in frontier settings beyond Sydney.

At the height of Governor Lachlan Macquarie’s now infamous military campaigns of 1816 that resulted in the Appin Massacre there were reports of groups of several hundred Gandangarra and Dharawal warriors roaming the district, raiding farms and attacking settlers. Between 1814 and 1816, a significant period of resistance, guerrilla warfare occurred in the area. Just after a local militia force led by Magistrate Robert Lowe had been beaten in a battle at The Razorback, settlers in the area fled as refugees from a war zone to the safety of the main settlements.

Were some of these domestic defensive structures built at the height of this period of conflict? Or were they built later, with this warfare still fresh in settlers’ minds? Were they built, like many other examples of government, military and other buildings around Sydney, with several uses in mind at the same time – securing precious grain, as well as defence against convict uprisings, bushrangers and Aboriginal attacks?

My first thoughts about these narrow windows was to err on the side of caution, and in line with heritage opinion. So I consulted an expert, who basically said that such embrasures were a normal feature of stone/brick granaries in the Anglo-European tradition. This heritage argument runs that the inner splay of the opening assists with air movement and as most of the embrasures in the Appin district are found in granaries or store rooms, and the cultural background of the property owners led to the use of traditional English building forms, whether appropriate or not, it seems they were distinctly agricultural in function and had nothing to do with defensive architecture.

So then I consulted a military historian and sent him pictures of the various slits in several buildings. He felt the buildings were ‘strong defensive structures of stone with gun slits built in. On the outside these would have been just narrow slits that were difficult to target with a spear, while on the inside the generous space allowed to traverse muskets meant that fire could be delivered with a wide arc …’

Fortified houses across the Empire

In other British colonies during the 18th century, domestic architecture, particularly in rural settings, almost always incorporated defensive elements. According to Louis Nelson’s study of architecture and empire in Jamaica, ‘the British colonial presence … was marked by a profound uncertainty, an unrelenting anxiety that found expression in their architecture.’ Fortified houses in Jamacia were built during a long period of guerrilla war in the countryside, and were often based upon Scottish border ‘tower houses’ or with a ‘bastion room’ (a stronghold) that would function daily as a normal room, but be well fitted with armaments and capable of military defence at a moment’s notice. Many of the loopholes doubled as ventilation holes.

Indeed, after a rebellion in 1760, ‘the following decade saw an intense period of fortified house construction that was based on fear and anxiety of past events, rather than any actual threat. It continued to shape architecture long after and into the 19th century’. Could the same be said of the 1820s across the out-settlements of Sydney? Were these rifle slits in some way referencing the history of Frontier War violence in the Appin district? (Nelson, 42-65)

In a recent article ‘”Necessary Self-Defence?”: Pastoral control and Ngarrindjeri resistance at Waltowa Wetland, South Australia’, Wiltshire, Lister and Rigney note that research into the fortification of colonial buildings in Australia has advanced recently, but that much of this research is ‘marred by uncertainty, with the purpose [of the architecture] being difficult to discern in the absence of archival records, oral history or other signs of use’. They do note that there are rare instances of concrete evidence of explicit defensive arrangements often found in pastoral ‘reminiscences’. (Wiltshire et al., 102)

Interestingly, this overview of buildings in Ngarrindjeri country found a ‘stable/shearing house’ with rifle slit style apertures (50cm by 10cm) that were ‘a surprising 2m above the ground, possibly requiring a prop or step for their use’ and potentially higher for better distant views – very much like the openings at the Mount Gilead property outbuilding in Appin. They also note that the narrow windows ‘probably served as ventilation, common in the English ‘Bank Barn’ design, where installation would mitigate heat accumulated from grain storage’.  (Bell 1997; Grguric 2008, 71; Wiltshire et al, 103-4)

As in the Sydney region, it is almost impossible to know the precise date of the construction of the buildings and whether this aligns with periods of frontier violence. But as Wiltshire et al argue, even if these structures were built later than the frontier violence period and for non-defensive reasons, they have become part of the cultural memory around this violence, becoming reference points ‘that physically anchor cultural memories of frontier violence’ to certain places. And importantly, as Nicolas Grguric notes, ‘this architecture also constitutes material evidence of a vanguard of Australian colonisation (or invasion) being carried out, not by the military or police, but by civilian settlers.’

My work has been very much focused on the historical archive – the discursive structure of the colonial written record of warfare and conflict in early Sydney. But archives also exist as things, as places, occupied by people. The few surviving remnant landscapes and buildings around Sydney may tell us more than the architectural expression of early settlers’ aspirations and traditions, and something of their fears as well.

With thanks to Saul Dean of the Total Environment Centre for alerting me to these buildings, to Sue Gay for her insights, to historians Ray Kerkhove and Rodd Pratt, and to the helpful people at the Appin History Centre, especially Nola Douglass.