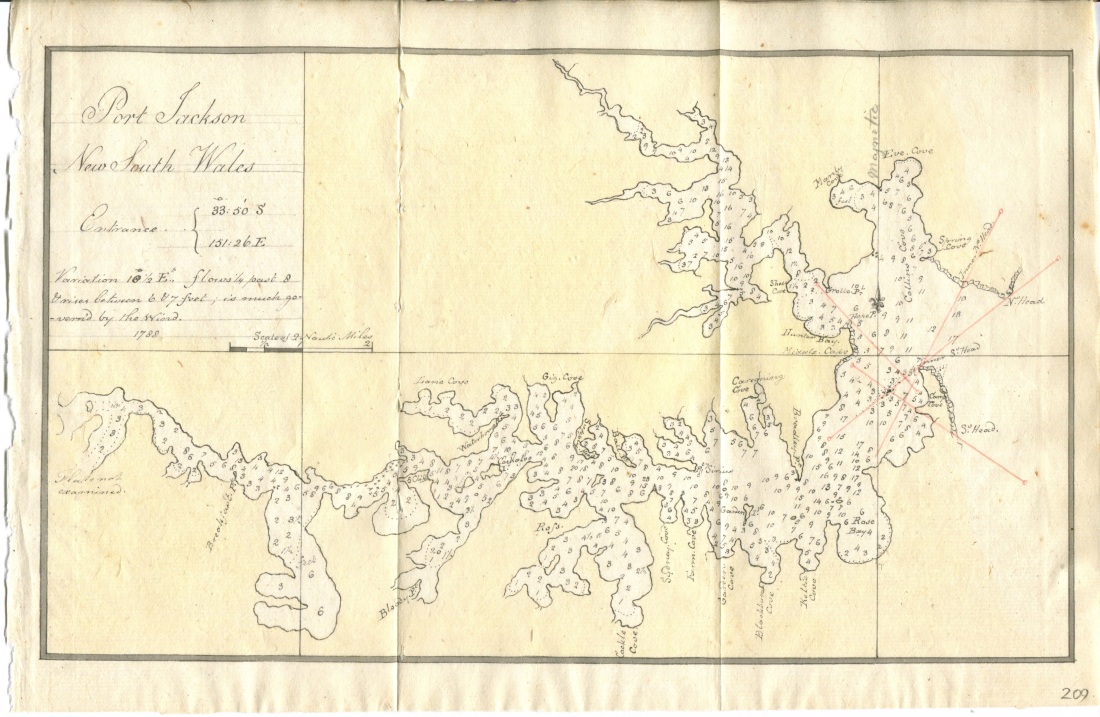 Picture a crisp Autumn day in May 1788 on the foreshores of Sydney Harbour, just two months after the colonists had arrived in Sydney. Two convicts – William Okey and Samuel Davis – have been sent out to cut rushes used in making thatch roofs for the buildings that were beginning to replace the canvas tents in Sydney Cove. At a likely ‘cove up the harbour’ they pitch a tent and, we assume, get to work. At this stage there had been a few convicts who had been speared and wounded by Aboriginal people, and some had gone missing. But the British officers were not sure if these missing convicts had just got lost in the bush or had been killed by Gadigal, Wangal or other Sydney people, or precisely what had happened to them. In the first months of 1788 there was little contact between the colonisers and the Sydney people, and often – though not always – the contacts were curious exchanges. There seemed to be little reason as yet to send out soldiers with convict work parties at first, though reports of violence outside the settlement were increasing.

Despite their suspicions, the military officers and officials needed hard evidence if they were to include these missing people in the lists of dead they would compile for official reports. This confirmation practice was to be one of the reasons conflict in the colony was under-reported. People suspected of being killed were left often noted as ‘missing’, and the reporting of people who were wounded was minimal, if at all, or with the simple phrase ‘several wounded’. In fact, if we had a fuller account of the casualties of conflict in the Sydney region, it may well be much better known today.

But when the colonists found the bodies of Okey and Davis, the officers could then confirm these as the first European deaths at the hands of the Aboriginal people in the Sydney region. Confirmation was quite obvious as the bodies had several spears still sticking out of them. It was certainly a gruesome find. Surgeon White described how Okey was ‘transfixed through the breast’ with one spear and had two other spears sticking out of him. Okey’s eyes had been taken out and his head had been ‘beaten to a jelly’. Okey’s was the first of many mutilations that were to disturb the colonists over the following years. This practice was known elsewhere later, and was known as a gruesome message to those who would find the body.

Most historians have assumed, as the two men were cutting rushes, this occurred at Rushcutters’ Bay. But several diaries say they were found ‘up the harbour’. More recently some historians have suggested other locations such as Darling Harbour. In The Sydney Wars I suggest it may have been around White Bay. Well, I was wrong.

Not long after my book had been published I was looking at a log book from the family of Lieutenant William Bradley, one of the junior officers on the 1788 ship HMS Sirius, that had just been donated to the Australian National Maritime Museum, where I work as a curator. Ships’ logs are pretty boring stuff generally; notes of tides and weather, coastal profiles and latitude and longitude. But in Bradley’s log there are some of his first charts and maps before they were tidied up, before they were combined with Captain Hunter’s material and made into the official version to be sent back to England, and there is some information on Bradley’s draft maps in his log book that didn’t make it into the later maps we all are familiar with.

So I was having a close look at Bradley’s first chart of Port Jackson and there are some unusual names he gave to various places – most of them after his fellow officers, and most of them names that were not used by Hunter, or presumably agreed to by Governor Phillip. One of the names stuck out – Bloody Point. It is marked on the piece of land jutting out at the end of Iron Cove, where the UTS Haberfield Rowers Club stands today, passed every day by hundreds of joggers on the Bay Run. This place, where two creeks join the cove, where at low tide these days the shopping trolleys emerge to signal a very shallow water depth, rushes were likely to have been plentiful. It is in my mind almost certainly the place where Okey and Davis were killed. At around the same time Bradley made this chart, the gruesome deaths of Okey and Davis were reported in all the colonial diaries and journals.

The events at Bloody Point shocked the colonists and were the cause of the first punitive military expedition undertaken in Australia, an expedition that was personally led by Governor Phillip. In fact, it was the first of four military expeditions he personally led, and there were arguably others such as the heavily armed ‘excursion’ up the Hawkesbury River. The detachment of officers, soldiers, and armed convicts (yes, that’s correct, armed convicts employed as ‘guides’ but also as auxiliaries, adding firepower to the small detachment) didn’t find any trace of the people who killed Okey and Davis. But a determined Governor Phillip then led them across to Botany Bay, after which they stumbled across a gathering of over 200 warriors and numbers of women and children. Fortunately for the small detachment, outnumbered more than 20 to 1, they were allowed to pass and return to the encampment at Sydney Cove. Straight after this, Phillip ordered that no one was to go outside the colonist’s ‘lines of limitation’ without being armed or escorted by soldiers.

Finding the name Bloody Point is I think important in several ways. It marks the site of the beginning of the first major punitive expedition against Aboriginal people in Australia, the first in what was to become a long history of such expeditions. It marks the site of the first such expedition in the Sydney region against Aboriginal people who had either been involved in violence against the colonists, or who apparently needed to be shown the repercussions of such violence. From Governor Phillip right through to Governor Macquarie’s military campaigns of 1816, the same language was used to describe punitive expeditions – they were to ‘infuse a universal terror’ or to ‘strike terror’ among Aboriginal people outside the settlements, a theme common to asymmetric, irregular or guerrilla warfare over time.

Bloody Point marks the site of the beginning of what in Sydney was very much an officially sanctioned, military led system, based in previous experience of insurgency in Ireland and frontier warfare experience in North America in particular, where raids or other guerrilla warfare could be tolerated but the killing of colonists was to be met with shows of force, often with the intention of bringing back the heads of anyone associated, or hanging their bodies from trees as gruesome warnings. From Governors Phillip to Macquarie, for over 30 years the practice of beheading or a form of gibbeting (in the Australian version, hanging bodies from a nearby gum tree rather than in a purpose built cage) was a way of not just harnessing the power of displaying the dead, but blurred distinctions between criminality and military resistance.

Bloody Point marks the beginning of a time of violence against Aboriginal people in the Sydney region that many historians have seen as a template for frontier wars elsewhere. Lieutenant Bradley’s journal at the State Library of New South Wales is well worth revisiting for an honest, workmanlike, junior officer’s assessment of the first six months of the colony at Port Jackson. He dutifully notes how over that time, curiosity with the invaders gradually turned to conflict. (See upcoming post on this)

I think it is important to remember too that in the first thirty odd years of pushing out a colony across the Cumberland Plain, unsanctioned reprisals by settlers were few and far between. Almost all the skirmishes, battles, massacres and punitive responses to attacks by Aboriginal people were conducted not by vengeful ‘posses’ or ‘armed parties’ but led by magistrates, constables, armed convicts and soldiers, all acting under official direction.

The killing of two convicts who had it seems transgressed Aboriginal law on Wangal land at Bloody Point (Governor Phillip thought the two convicts had tried to steal nawi or bark canoes) reminds us too that the warfare and conflict across the Sydney region was not always one-way traffic – that while there were massacres, there was also Aboriginal resistance. There was small scale conflict such as at Bloody Point, and there were military victories such as the Battle at Razorback in 1816, or in warfare along both the Hawkesbury and the Nepean Rivers that forced white settlers to flee as refugees from their farms. Who today remembers the lower Blue Mountains township of Kurrajong as the only entire settlement in the Sydney region to have been abandoned at one point due to attacks by Aboriginal warriors?

The finding of Bloody Point, erased from European-Australian maps and memory, gives me hope that there are more such discoveries to be made – if we turn our full attention to it, at last.